We always knew the Labcold penguin had star quality… And now his big moment has come! He was at Pinewood Studios, home to the famous 007 Stage and sent us this photo.
The stage was built for the Bond film the Spy Who Loved Me in 1976. Since then it has been used for other film sets including Lara Croft Tomb Raider, The Louvre Gallery for The Da Vinci Code, and The Chocolate River Room for Charlie and the Chocolate Factory.
Since the opening of the new 007 stage in 2007 more famous films have used the space, including the Greek fishing village for Mamma Mia!, sets for the latest Bond, Quantum of Solace and the Fountain of Youth for Pirates of the Caribbean: On Stranger Tides. Now it has played home to the most famous star of all, the Labcold penguin. 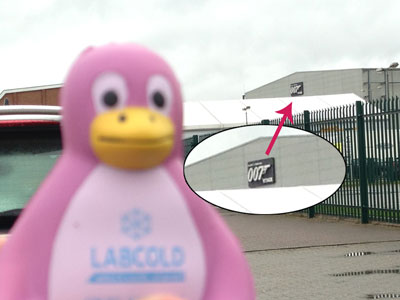